Iconic Mothers - Behind the Glamour 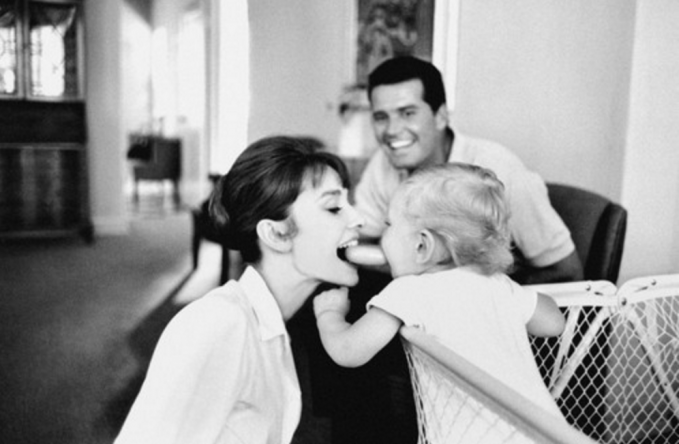 BEHIND THE GLAMOUR - ICONIC MOTHERS & PREGNANCY...

These beautiful ladies are all known as world famous Icons - they were all Mothers too. We share some rare, beautiful images and heartbreaking information you may not know about them. They were just like any of us....

Formerly known as Audrey Kathleen Ruston, Audrey Hepburn was a British actress and humanitarian. An icon who exuded elegance, her legacy lives on to this day. Not only was she talented, but she had an incredibly positive outlook:

“Nothing Is impossible, the word itself says ‘I’m possible’”

Recognised as a film and fashion icon, she was ranked as the third-greatest female screen legend in Golden Age Hollywood. Not only that, but she was inducted into the International Best Dressed List Hall of Fame.

Not only was Audrey Hepburn one of the most iconic women of her time, she was also a mother of two boys and this was arguably her favourite role. Unfortunately, the road to two healthy pregnancies was not an easy one as she suffered three miscarriages in her life. One of these miscarriages happened when she fell off a horse and broke her back during the filming of ‘The Unforgiven’.

This meant that when she had her two sons, Sean and Luca, it brought her more joy than she ever thought possible. According to Vanity Fair, she wrote a letter to a close friend shortly after Sean’s birth in 1960 that read: “Sean is truly a dream and I find it hard to believe he is really ours to keep.”

A decade after his mother’s death in 1993, Sean Ferrer spoke candidly to The Telegraph about hearing his mother’s voice wherever he went: “For me, it’s not the voice of an actress. What I hear is the woman who nursed me through ear infections or told me stories when I was young.”

Luca even said that his mother was more of an adoring parent than an icon, and she stayed true to herself as a ‘simple country girl’.

London-born Elizabeth Rosemond Taylor DBE was a British-American actress, businesswoman and humanitarian. She began her career as a child actress in the early 1940s and was one of the most popular stars of classical Hollywood cinema.

She starred in many famous films such as ‘Cat on a Hot Tin Roof’ but she was just as famous for her gorgeous violet eyes and her (then) scandalous love life.

Taylor was married at the age of 18 to Conrad “Nicky” Hilton Jr. and when they separated she divulged that he physically abused her, even kicking her when she was pregnant causing a miscarriage.

Her previous ill-fated marriage did not put her off men, however. She married English actor Michael Wilding who was twenty years her senior. She had two children with him, Michael and Christopher.

After this marriage failed, she went on to marry Mike Todd, a producer, and had a daughter, Liza. Sadly, Mike was killed in a plane crash, leaving Elizabeth a widow at age 26. She then sought comfort in the arms of actor Eddie Fisher, who was still married to Debbie Reynolds.

On the set of Cleopatra in Rome in 1961, Taylor was drawn to Richard Burton whose passion for life and love equalled her own. Their wild ten-year marriage, during which they adopted a 3-year-old child, Maria, from Germany, crashed into a love-hate-inferno, largely due to Burton’s drink problem. Taylor went on to say that the best time of her lie ‘was when Richard and I were married, and the kids were babies, and we lived like a pack of gypsies.’

She was married again to U.S senator John Warner, during which she checked into the Betty Ford Center to battle alcohol and prescription drug dependencies. After this, she notched one more fizzled marriage to handy-man Larry Fortensky.

Not only was Elizabeth Taylor a mother, she was a successful businesswoman, proving you can be both at the same time. She created signature fragrances, including Elizabeth Arden’s hugely successful White Diamonds, which has generated more than $1 billion in sales.

She was always careful to shelter her children from the spotlight. William J. Mann said: “She was this globetrotting, beautiful siren who kept them out of the spotlight- she wasn’t pushing them onto TV shows as some famous parents do. There wasn’t a lot of use for her children in the media.”

Sophia Loren is an Italian film actress and is one of the last surviving stars from the Golden Age of Hollywood. Encouraged to enrol in acting lessons after entering a beauty pageant, Loren began her film career at age 16 in 1950. She became known as one of the most beautiful women in the world.

In 1957, Loren starred in her first Hollywood film ‘The Pride and the Passion’ and at the same time she became enmeshed in a love triangle with a co-worker, Cary Grant, and an Italian film producer named Carlo Ponti. Although she liked Grant, she ultimately chose Ponti, a man who the media joked was twice her age and half her height.

Even though they were married in 1957, complications regarding the annulment of Ponti’s first marriage prevented their union from being officially legally recognised in Italy for another decade. Their marriage remains one of the rare, heart-warming success stories among celebrity relationships, though.

Sophia Loren sadly suffered the heartbreak of two miscarriages before she fulfilled her dream of being a mother, saying ‘losing two babies made me feel like such a failure as a woman.’ She said that having children had become an ‘obsession’ and by the time she reached 29, she wondered whether she’d ever successfully have children at all.

Speaking to the Daily Mail of her traumatic experience she said: “My most painful recollection of that night was the scornful look on the faces of the nurses- who were nuns. They all seemed to blame me

“Of course, those nuns thought they knew the real story, but they didn’t know anything about me, my desires and my fears. They were insensitive, inhumane, devoid of feeling. Their humiliation of me was spurred by prejudice and ignorance.”

Sadly, a year later, Loren suffered the same heart-breaking situation all over again and she was even told by a doctor that she had ‘excellent hips, you’re a beautiful woman, but you will never have a child.’ His scathing words knocked Loren’s confidence, dashing her hopes of motherhood, making her feel inadequate.

Loren successfully had a child in 1968, Carlo Jr., who Loren describes as ‘the greatest, sweetest, most indescribable joy I had ever experienced.’ Her previous miscarriages tainted how she felt though, as she was scared to leave the hospital and stayed there for almost two months.

In 1973, her second child Edoardo was born. Loren said that ‘Edo doubled my happiness. It was, I realised, one of those unfathomable mysteries of motherhood.’

Grace Patricia Kelly was an American film actress who, after starring in several significant films in the early to mid 1950s, became princess of Monaco by marrying Prince Rainier III in April 1956.

Grace Kelly exuded more sophistication and glamour than any other actress in 1950s Hollywood, but her charisma and talent disguised a harsh childhood with a physically abusive mother and an anti-Semitic father.

After Grace graduated, she attended the American Academy of Dramatic Arts in New York, but her parents hoped that she would get the acting bug out of her system and ‘grow up to marry some nice boy.’ Grace never really had the support of her family.

In September 1952, Kelly got the call to screen test in Hollywood for Magambo, with Clark Gable playing a big game hunter. She fell in love with him, despite the fact he was 28 years her senior, but they separated because of the age gap.

After several romances, Grace went onto marry Rainier, but she never imagined that her would-be fairy-tale life would be harder than any day on a movie set, or that she would be called upon to create more illusion than she had as an actress.

At the end of her honeymoon, she was Princess Grace of Monaco, and pregnant. She suffered morning sickness, her husband’s erratic temperament and not feeling particularly welcome in the Monegasque society. She had their first child, daughter Caroline, in 1957, and the following year she had a son, Albert.

She suffered two miscarriages which are not widely documented, perhaps due to her royal status. Afterwards, she had Stephanie in 1965. Grace had three children and was expecting a fourth in 1967 when it was discovered that the boy she was carrying had died inside her a month early. This ended her dreams of having a larger family.

Sadly, her life ended prematurely when she was driving back to Monaco in 1982 with her daughter Stephanie. Initial reports suggested the cars breaks failed but follow up reports suggested maybe she had suffered a stroke.

Jimmy Stewart, speaking at her eulogy said: “Every time I saw her was a holiday of its own.”

All these ladies went on to have healthy babies after miscarriage - there is hope.

Despite the fact that 10-25% of recognised pregnancies end in miscarriage, there is such a stigma and a pressure surrounding it - it is certainly something that is not discussed enough. When a woman finds out she's pregnant, she's often too scared to tell friends and family due to the fear of something going wrong. We are told not to tell anyone until you've had your 1st Ultrasound at 12 weeks. This means keeping things quiet from your friends, family and your boss. You have to suffer extreme morning sickness without anyone finding out, you feel bad asking your boss for time off because they don't understand why. Then when you find out your baby doesn't have a heartbeat you're all on your own wishing you had someone to talk to.

We do need to talk more, we do need to tell friends and family our amazing news, we do need support if anything goes wrong - you will feel better that you have someone to talk to. Future pregnancies will make you feel very anxious, but keeping your miscarriage quiet can lead to depression and severe anxiety. If you've suffered a miscarriage and need some support head over to the miscarriage association